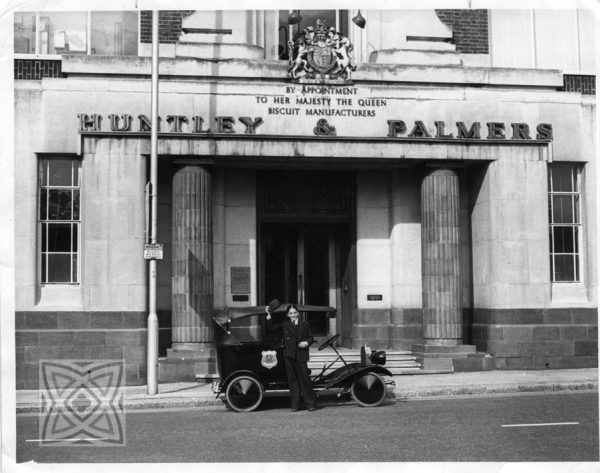 Reading during the nineteenth and twentieth century was home to the largest and most famous biscuit factory in the world, Huntley and Palmers. Notable visitors included George Meredith and Oscar Wilde, and the bar scenes in Bugsy Malone were filmed there.

It was founded in 1822 by Joseph Huntley, under the name ‘J. Huntley & Son’, as a small biscuit and confectioner shop that was located at n.o. 119 London Street (now home to Age UK Berkshire). However, Joseph Huntley retired from the business in 1838 because of his ill-health and handed control over to his older son, Thomas who later became business partners with George Palmer. From this, The ‘Huntley and Palmer’ brand was born, and the company grew so quickly that in 1846, it moved to a factory on King’s Road. Huntley and Palmers’ packaging was also iconic, especially its biscuit tins and, when Bernard Grenfell and Arthur Hunt discovered lost Sappho poems in 1896, they carried them home in a Huntley and Palmers ginger nut tin.

The company eventually became biscuit makers to the British Royal Family and by 1900, it was the largest biscuit manufacturer in the world, employing over 5,000 people. The Palmer family was well-known in Reading for generously giving money and land, including Palmer Park, and Huntley and Palmers’ fame led to Reading becoming know as ‘biscuit town’.

We spoke to Lesley Over, she worked in Huntley and Palmers’ HR department when Bugsy Malone was being filmed there and she told us all about the time Michael Bond came in for a visit.