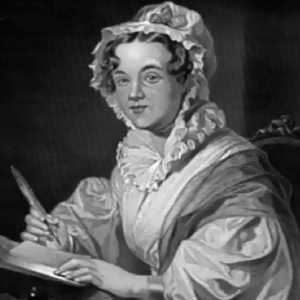 Mary Russell Mitford was an author who wrote about life in and around Reading in the early 1800s. The way of life and many of the characters that she describes in works like Belford Regis seem almost unbelievable now when we look at modern Reading.

Mary was born into a fairly well off family but her father, a doctor, led an extravagant life that far outstripped the families income. He was also a gambler, who got into debt playing whist and making bad investments. When Mary was 10 she won £20,000 on a lottery (about £2 million in today’s money) and her father spent that too, he used it to build their house on London Road in Reading.

Mary began writing to support herself and her family, after her father’s behaviour had plunged them into poverty. Her father continued to spend the money she earned until he died in 1842, but this wasn’t the only way that he influenced his literary career. His impact can be seen throughout Mary’s work in the honest, empathetic and humorous way she describes people.

Her characters are vivid, full of contradictions and always amusing, and her writing shows her tolerance of other people’s shortcomings. Her characters are flawed, but her always shows people in a kind light, this is summed up in one of her biographies where she is quoted as saying “We may admire people for being wise, but we like them best when they are foolish.”