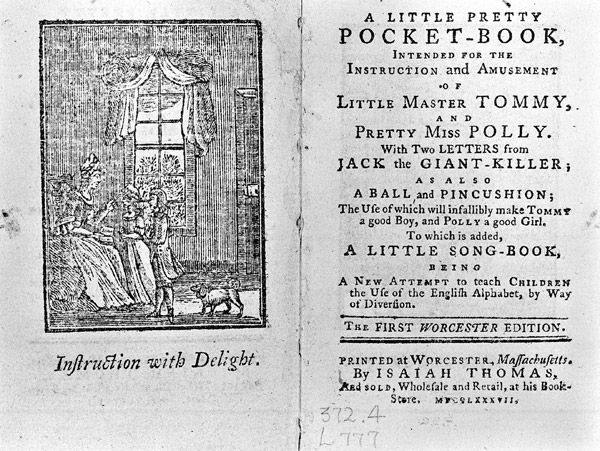 Market Place is one of the oldest parts of Reading, it has seen many changes over the years and been the setting for many of the towns most significant cultural events: Celebrity portrait photographer Gilbert Adams had his studio here, Michael Bond survived an air raid bombing here in 1943 and, it is considered by some to be the birthplace of children’s literature.

John Newbery opened his publishing business in Market Place in 1740, he was the first publisher to make books for children financially sustainable.
Newbery wrote books himself; his first book was called A Little Pretty Pocket-Book, intended for the Amusement of Little Master Tommy and Pretty Miss Polly with Two Letters from Jack the Giant Killer contains rhymes and instructions for games. There was also a strong moral element to the book, with each rhyme having a clear moral or life lesson for children to learn. This idea that children’s books should provide moral instruction continued for a long time, all the way up until the 1900s. Newbury’s book was a big success, due in part to his clever marketing plan; with every copy of the book he gave away a pincushion (for girls) or a ball (for boys). His book was financially successful and it made him famous.
Newbery’s work meant that other publishers saw children’s books as less of a financial risk, meaning that more of them began to publish them. This ensured that children’s literature had a sustainable future. John Newbury’s work is commemorated in the Newbery Medal for children’s literature, which is awarded for outstanding contribution for children’s literature in the united states each year.

Poet, author and essayist D.H. Lawrence was a controversial figure in english literature during his lifetime. His best known work (Lady Chatterly’s Lover) was the subject of an obscenity trial and much of his other work was subject to censorship in one form or another.

Lawrence’s link to Reading comes in 1909 when he came to the town and bought himself a melon. There is no record of where this happened but after researching the story extensively we think it probably happened in Market Place.